The extra space is definitely needed since 8Pack uses two highly overclocked systems in the Orion X2 which make no compromises in terms of performance. The main system therefore uses an ASUS ROG Rampage 6 Extreme Encore X299 E-ATX motherboard with the X299 chipset that holds an Intel Core i9-10980XE 18-core CPU with 36 threads from Intel's Cascade Lake X-Generation which is then overclocked to at least 4.6 GHz. This extreme CPU is then paired with no less than two independently operating NVIDIA RTX Titan graphics cards, each with 24.576 MB GDDR6 VRAM for unbeatable graphics processing power. Alternatively, the system can be configured with two NVIDIA RTX Titan graphics cards in an NVLink setup.

Add to that 128 GB of DDR4 memory from Corsair, which consists of hand-picked Samsung B-Dies for maximum compatibility and performance. A total of 4 sticks, each clocked at 3600 MHz, provide an impressive boost in memory performance. Furthermore, the E-ATX system comes with a blazing fast 2 TB 970 Pro M.2 NVMe SSD from Samsung that serves as the primary storage drive. A second drive then provides additional storage space. This is all backed up by a Seagate Ironwolf Pro HDD with a full 14TB of space.

The vision of the Mini-ITX system arose originally from the idea of it being a secondary system that would act as a file-, media- or gaming server. Yet as anyone who knows 8Pack will tell you, only the very highest of high-end components will find their way into one of his builds. That's why it runs on the cutting-edge ASUS ROG Strix Z490I Gaming Mini-ITX motherboard with a 5,0 GHz overclocked Intel Core i7-10700K CPU (Comet Lake) from Intel's 10th generation of processors. Moreover, it includes a NVIDIA RTX Titan to give the appropriate level of graphical performance in 4K gaming. 32 GB of 8Pack DDR4-RAM clocked at 3600 MHz, two Samsung 970 Pro M.2 NVMe SSDs each with 2 TB storage in RAID 0, and an additional Seagate Ironwolf Pro HDD with 14 GB of storage help to complete this epic system. 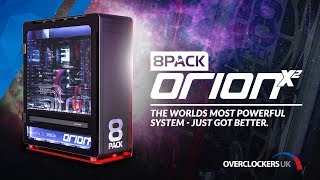