Caseking, Germany's best online PC retailer, is proud to present 8Pack Systems courtesy of English top seller and partner Overclockers UK. This is an absolutely top-of-the-range prebuilt machine offering ultra high-end equipment designed by the worldwide number 1 overclocker multiple world record holder Ian "8Pack" Parry. 8Pack, the World's number 1 ranked extreme overclocker** has spent the last five years forging a stellar reputation as one of the world's foremost experts in extreme performance PCs for both consumer and professional applications. Thanks to his close working relationship with the leading brands in high performance hardware 8Pack is able to provide groundbreaking performance improvements for some of the biggest names in bleeding edge industry by pushing the limits of performance to astronomical levels. You too can own a part of this legacy thanks for his partnership with Overclockers UK and this range of incredible PCs!

Obviously, creating a PC to live up to 8Pack's monumental standards is a time consuming, arduous task. Every 8Pack PC is hand-built, from the ground up by OcUK's top ranked master builder, using cutting edge manufacturing techniques to design and produce custom solutions which meet 8Pack's exacting standards. The system is then handed to 8Pack himself to do his magic, tuning every aspect of the system performance to its peak stable point so no two are identical, thus creating a truly bespoke system prodigious performance.

Creating a system of such power and performance takes an incredible amount of time and preparation. Large numbers of processors are tested and only the fastest few percent are deemed suitable; Our memory is designed at manufacturer level to include only the best, hand-selected chips and our cooling is over-spec'd to ensure the quietest possible operation. The components are tested in prospective motherboards to ensure synergy and BIOS support. These attributes make a large difference to the overall integrity and performance of the system. Once that has been done 8Pack takes this efficient combination of cherry picked components and tunes each of them to their peak, thus establishing a harmonious balance. This is why he is renowned as one of the world's best overclockers and why his systems are the zenith of performance.

The 8Pack system offered here is known as the "Supernova", and as such Ian Parry opted for the ASUS Zenith II Extreme Alpha motherboard with AMD sTRX40 chipset as its foundation. Cherry picked from umpteen AMD Threadripper processors, 8Pack takes only the very best performers and then overclocks the AMD Ryzen 3rd Gen Threadripper 3970X to a minimum of 4,2 GHz - or even higher, because 8Pack always likes to take the CPU's performance to the very limit. The last point also holds true for the three already powerful NVIDIA GeForce RTX 2080 Ti in NVLink mode, each of which provide 11 GB of GDDR6-VRAM to support even the highest multi-monitor resolutions (far beyond Full HD) meaning even extremely demanding PC games run flawlessly. Power is supplied courtesy of a high-end 2000 Watt power supply from Super Flower. 8Pack was even personally involved in the development of this ultra-powerful SuperFlower Leadex 8Pack Edition 2000W 80+ Platinum, resulting in a PSU that not only impresses onlookers with its power - but also its astonishing effectiveness of 94% and even higher when operated on a German power grid!

Achieving the maximum possible overclocks from both GPU and VGAs would normally mean keeping a close eye on temperatures - yet here 8Pack equips the Supernova system with two independent water cooling loops that bring with them such extensive reserves of cooling performance that the hardware in question need never even break as sweat. The perfect case for this watercooled monster is provided by Lian Li in the form of the DX888WX. 128 GB of hand-picked 3.200 MHz RAM, two fast PCI-Gen4-NVMe SSDs with 1 TB storage, one huge 2,5" SSDs from Samsung with 4 TB as well as two 14 TB hard drives in extra-secure RAID 1 mirroring mode round out the Supernova PC. 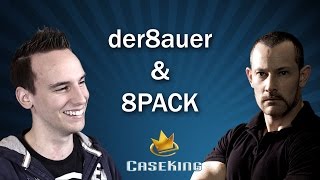 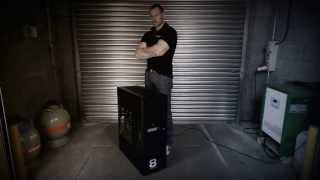 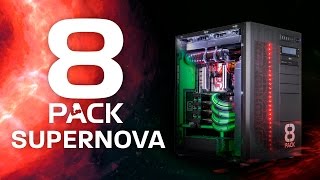 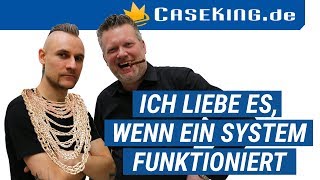 This PC is incredible, no words can describe its abilities, 8Pack has fantastic...
Bosshaft

This PC is incredible, no words can describe its abilities, 8Pack has fantastic support, the reason you spend the money, despite taking this over to Germany and running subtly different power in the Converted Barn, 8 pack worked me through every setting to bring this PC to its limits safely and reliably. I have run this for 1 year now and it has been flawless despite me running Windows 8.1.

Still every game I have run on this has been able to fill its full potential across my 3 24 Inch monitors and all my Work and design runs without hiccup.