The AMD Ryzen 5 3600X from the Matisse family of processors possesses 6 CPU cores and is based on the "Zen 2" architecture. After "Zen" and "Zen+" comes the third generation of the Zen microarchitecture which, thanks to the more advanced 7 Nanometer node, is also able to offer significant clock frequency and performance increases along with many new modern features. Paired with an AMD X570 chipset, the Ryzen 5 3600X supports twice as the total bandwidth as its predecessor thanks to the new PCI-Express 4.0 standard. All Ryzen 3000 processors use the esteemed AM4 platform and basic compatibility is retained even on older chipsets.

The Bundle with an AMD Ryzen 5 3600X and Raijintek Orcus Core at a Glance:

AMD Ryzen 5 3600X The AMD Ryzen 5 3600X has six physical CPU cores that can process two threads at a time thanks to simultaneous multithreading (SMT), effectively doubling the number of cores to 12 with the addition of six virtual cores. The six-core mid-range model operates with a high clock rate of 3.8 GHz per core, which precisely adapts to the respective load scenario in real time using Precision Boost 2 and increases from 95 watts to 4.4 GHz turbo as part of the Thermal Design Power (TDP) design.

In combination with a high-end AMD X570 chipset, the AMD Ryzen 5 3600X supports the PCI Express 4.0 standard. The integrated memory controller of the CPU supports fast and energy-efficient DDR4 memory in dual-channel mode with a native clock frequency of 3.200 MHz.

The AMD Ryzen 5 3600X is equipped with the Auto-OC Feature Precision Boost Overdrive, which can increase the processor clock up to 200 MHz beyond the factory set limit of the maximum boost clock, if an AMD X570 motherboard is used and sufficient CPU cooling is ensured. In addition, all AMD Ryzen CPUs are "unlocked" and have an unlocked multiplier. Notes: For PCI-Express 4.0 and Precision Boost Overdrive an AM4 motherboard with AMD X570 chipset is required. Older chipsets of the 300 and 400 series require a BIOS/UEFI update to operate this CPU.

The Orcus Core features a 360mm triple-design radiator with a low overall height. Through a transparent window in the cooling block, a small wheel can be seen that serves as a flow indicator. RGB lighting inside the tank indicates speed and temperature. The graphite and ceramic ball bearing provides a maximum flow rate of 66 litres per hour at 5000 rpm and a maximum volume of 25 dB(A).

The copper base of the heat sink absorbs the waste heat from the processor and efficiently transfers it to the water. Powerful tower coolers often cannot be used due to space constraints in compact cases. In the case of the Orcus Core, however, only the flat cooler has to sit directly on the CPU. The radiator can be installed quite freely into a more appropriate installation location, taking the hose length into account. Tool-free installation makes installation child's play, but safe. Heat conducting paste is already applied to the underside of the cooler, a spare tube is included in the package. Cooling liquid for refilling is also included.

For the Auras 12 RGB fan series, Raijintek relies on an O-type LED ring that delivers outstanding colours and uniform brightness. Of course, the fans also impress with their performance values, which are quite remarkable with a volume of 67.62 m³/h and a maximum of 0.61 mm H2O static pressure at a speed of 1,200 revolutions per minute.

Equipped with special anti-vibration pads in all four corners of the fan, vibrations and noise levels can be minimized, so that the maximum volume of the Aura 12 RGB is only 24.8 dB. A 6-pin cable connects the two fans to the included controller, allowing the 256-colour LED ring to be configured for colour, effect and LED speed. The controller itself is connected to the PC via a SATA port and supplied with power. 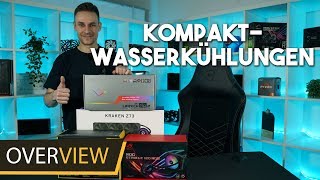