The AMD Ryzen Threadripper is back! The second generation of the flagship series has returned in the shape of the Threadripper 2950X, with the Texas-based manufacturer putting 16 cores of processing power on the CPU die to retake the crown in the High-End Desktop Segment (HEDT). Up to 64 PCIe 3.0 Lanes are placed at the disposal of the 2000- series Threadripper CPU, with both gaming PCs and workstations - especially the latter - benefiting from the additional connectivity for workstations with dual high-end graphics paired with multiple NVMe PCIe SSDs.

Additionally 1 TB DDR4-RAM is supported and can operate in Quad-Channel Mode with native frequencies of up to 2.933 MHz supported, so as to provide the capacities necessary for professional applications and server functions when it comes to memory. Depending on the motherboard, memory with markedly higher clock frequencies can be used when overclocking in order to unlock even greater performance from the Ryzen Threadripper.

The Threadripper 2950X is a "Zen+"-generation processor with 16 physical CPU cores which, thanks to Simultaneous Multithreading (SMT), are capable of processing two threads each simultaneously. This means that the total number of cores is increased by an additional 16 virtual cores to make for 32 cores effectively. The 16-core CPU operates at a clock frequency of 3,5 GHz per core which, utilising Precision Boost, can be adjusted in precise real-time increments in accordance with the exact needs of the task in hand - irrespective of whether this is in the context of games or applications. The CPU can adjusted itself on-the-fly in small 25 MHz increments while remaining within the TDP up to a Turbo of 4,4 GHz.

As a result the chip architecture operates both cooler and more quietly than its predecessor while also being specially optimised and adapted for high frequencies. Energy efficiency has undergone marked improvements to ensure optimal functioning of the high number of CPU cores alongside their relatively high clock speeds, meaning that the processor is successful in remaining within its modest 180 Watt TDP. The impressive specifications of the processor demonstrate like none other the extent to which AMD's investment in technology and product development have really paid off, and this is why - in comparison to its Excavator predecessor - massive Instruction Per Clock performance increases (IPC) are possible in both classic single-threaded applications as well as in highly parallelised multi-threaded applications. The result is a CPU capable of maintaining the greatest possible performance under any and all eventualities.

The silicon utilises the advanced 12 nm FinFET manufacturing process lithographed with stabled transistors (also known as 3D transistors). The dramatic reduction in node scaling results in more space being available for utilisation on the processor diet itself, and the size of the Threadripper CPU itself enables the integration of a total of 8 MB Level 2 Cache and a full 32 MB of Level 3 Cache. Due to the intelligently controlled cache buffer and "Smart Prefetch" algorithms, Ryzen is perfect for responsive data access times and ultra-fast calculations in all use case scenarios - whether in gaming and virtual reality or cloud computing and virtualisation.

Manual overclocking is no longer something that owners of AMD's Ryzen Threadripper series need concern themselves with, this is because the CPU regulates the entire process of its own volition: The AMD Ryzen: the AMD Ryzen Threadripper 2950X is equipped with revolutionary automatic overclocking that goes by the name of Extended Frequency Range (XFR). This means the CPU's frequency can exceed by leaps and bounds the factory-established Boost Clock limits - that is while the chip is supplied with sufficient cooling at any rate. As soon as the CPU's integrated sensors detect an increase in cooling capacity, the Ryzen CPU adjusts its frequencies in accordance with the cooling solution available.

The integrated memory controller of the CPU on TR4 motherboards additionally support fast and energy-efficient DDR4-RAM operating in Quad-Channel Mode either with or without ECC memory. Using AMD Ryzen Threaderipper's "Pure Power" sensors, the CPU is capable of continuously monitoring temperatures, voltages and frequencies in order to achieve a perfectly tailored balance of energy consumption against the use case scenario. Furthermore, when it comes to SIMDs (Instruction Sets), AMD draws far ahead of the competition and is a master of AVX2 (Advanced Vector Extensions). These mathematical calculations go hand-in-hand with scientific simulations, video editing, as well as image- and audio editing. The massive performance benefits on offer also assist with heavy video gaming and multimedia applications, at least in so far as the respective application is capable of utilising said features. Notes: 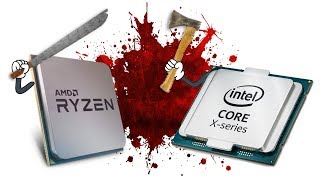 What can I say except - amazing. Totally blown away with it.
Nick

What can I say except - amazing. Totally blown away with it.