What's it all for, the most gobsmacking goal, the best F1 lap time, or the most stunning no-scope if you can't share it and comment on it? The capture cards of Elgato allow users to flawlessly stream the best gameplay recordings alongside commentary and a webcam stream on platforms such as Twitch.tv, UStream or YouTube. The capture card specialists at Elgato offer a whole smorgasbord of premium quality devices that can either be installed in your PC directly or carried with you to your next LAN party with the conveniently portable USB version. On top of this, Elgato also provides easy-to-use intuitive software alongside its premium hardware. Get ready to become your very own producer and director!

The Features of the Elgato Game Capture HD60 Pro

Elgato's capture cards have some significant advantages over conventional software solutions: the Game Capture HD60 Pro supports all kinds of devices that output unencrypted images via HDMI - whether it be a console like the Playstation 4, Xbox One or the Wii U or even devices like cameras. All resolutions from 480p output to 720p with 30 FPS up to 1080p at 60 FPS are supported for both input and output. The maximum Bitrate is supported is 60 Mbps. If preferred, the Game Capture HD60 Pro supports recording video material into more compressed formats.

The HDMI output of the Game Capture HD60 Pro can be passed through to your PC, where the video material can then be processed and edited. Alternatively, the HDMI output signal can be output to a television.

Elgato devices also offer Flashback Recording. This enables the Game Capture HD60 Pro to maintain a buffer of some significant size, meaning that you can rewind and start a recording, which then continues seamlessly when the livestream ends. The integrated H.264 chipset in the Game Capture HD60 Pro can simultaneously compress video data. This reduces the PC's CPU load.

The software also includes an editing mode to enable users to splice video sequences. After this, users can then use the software itself to publish the content directly on Facebook or Twitter or to iTunes on an iPad and iPhone or Apple TV. Of course, screenshots can also be produced.

In addition to your own commentary (recorded via headset), voice chat from the Playstation 4.0 or Xbox One can also be recorded via the analogue audio input on the Game Capture HD60 Pro and then embedded into the video stream. 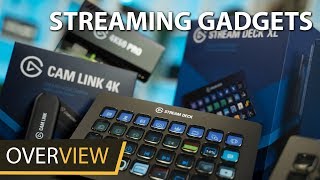