Lian Li has brought back the popular LANCOOL series and the buzz around this case has been a sight to behold. The feature-rich Midi-Tower case has returned in two variants: the LANCOOL ONE and the LANCOOL ONE Digital. Both shine in terms of the incredible amount of space they offer for hardware, their ingenious construction and the attention to detail Lian Li brings to the table when it comes to cooling. The digital RGB-LED lighting also goes a long way to elevating this case above the competition. The LANCOOL series of cases are rounded out by the addition of lots of intricate and fine features, including benefits such as a PSU shroud, which also doubles as a means of installing optional fans or SSDs.

The Features of the LANCOOL ONE Digital at a Glance

The exterior of the LANCOOL ONE Digital makes a strikingly slim impression, the interior on the other hand offers an abundance of space for air- and water cooling. In total, nine 120 mm fans can be installed, if 140 mm fans are preferred however, then four can be fitted. Two 120 mm are also thrown in courtesy of Lian Li themselves, one is installed on the front, and a further fan is installed in the rear. A unique feature here lies in the fan slots on the PSU shroud, which itself is nearly see-through thanks to the extensive air inlets installed on the top of it. The CPU cooler installed may take up to a maximum of 175 mm - plenty of space.

Those on the other hand who would prefer water cooling are also well catered for in terms of the options available to them. On the front as well as on the top of the case, compatibility with 360 mm radiators is provided. The rear of the case even allows an additional 120 mm radiator to be installed. The result of all this is a huge number of hardware options to be utilised in the available space. When using a 65 mm radiator on the front, graphics cards up to 350 mm long are an option. Should fans be installed in the front instead, GPUs can be up to 420 mm long. Graphics cards may also be installed vertically, although the requisite riser cable must be purchased separately. Motherboards up to E-ATX form factor can be installed in this spacious case with ease. In terms of space for power supplies, PSUs up to 285 mm long may be installed.

To ensure the interior of the case receives adequate cooling, Lian Li has covered the front of the case with stylish brushed aluminium, further supplemented by the addition of attractive yet effective sidewards-facing air inlets, with even the front of the case offering inlets as well. There can be no doubting the degree to which form and function have been skilfully balanced in this case. The edges of the case not only look clean and attractive, they also conceal an addressable RGB-LED strip that bathes the LANCOOL ONE Digital in coloured lighting. The I/O panel is similarly well-equipped, besides the two USB 3.0 slots and two audio jacks, there is also a switch for controlling the RGB-LED lighting.

The front of the case is really where the case shines however, and this is offset by the tempered glass side panel on the left side which enables an unobstructed view into the tidy interior of the case. The PSU shroud mentioned above guides the user's eye towards the basic hardware of the PC, such as the motherboard or the graphics card. If no fans are needed in the top of the case, this can be covered by two brackets on which two of a potential total of four 2,5" SSDs in the case can be installed. The two further SSDs can be installed on the reverse of the motherboard tray and underneath the PSU shroud at the front, Lian Li also generously offers an HDD cage capable of holding two 3,5" drives. Three dust filters on the bottom, top and front round out the extensive feature list of this attractive case. 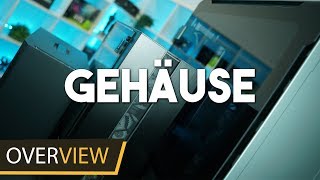