Thanks to the new MJX controller, the latest generation of V-NAND memory architecture, optimised algorithms and Intelligent TurboWrite, the revised EVO series is now even faster and more reliable. The SSD 860 EVO is particularly impressive thanks to the consistency and lack of fluctuation in performance, especially under rapidly changing load conditions and its high performance for longer-lasting read and write access operations. Additionally the Samsung 860 EVO series offers greater compatibility, versatility, and up to eight times more robust than its predecessors.

The Samsung 860 EVO at a Glance

The drives from Samsung's 850 series have, for a long time, been the standard recommendation when choosing a new SSD. Great prices, the highest possible system stability, reliability and compatibility and the maximum Write-, Read- and access time performance - these are the things that make Samsung's Solid State Drives sought after everywhere.

Each of these milestones have been achieved due to the fact that the Korean manufacturer controls all aspects and components of the flash memory and has developed them all in house, from the memory cells to the controller and the firmware up to the SDRAM Cache. With the 860 EVO Samsung has developed their own flash technology further while offering a very attractive entry level SSD as well. Taken together these attributes make the "SSD for everyone" tagline even more pertinent.

As such the 860 EVO, standing for evolution, represents a product that builds upon its predecessors such as the 850-EVO- and 850 PRO series and continues to be situated just below the more expensive 860 PRO in performance terms. However it does close the gap with its big sister and is almost on a par with with its professional counterpart in terms of speed.

The 860 EVO writes at up to 520 MB/s and reads at up to 550 MB/s which is sat the theoretical limit of the SATA 6G port. The new MJX controller with its refined error correction capabilities has allowed the power requirements of the drive to be reduced even further. The majority of these improvements are all thanks to the innovative use of 3D V-NAND memory cells.

Instead of attempting to constantly reduce the size of the flash memory chips (known as NAND) to achieve higher cell density, Samsung has opted to stack the transistors vertically in 64 layers and in doing so has managed to achieve a marked increase in storage density. Increasing the number of MLC flash cells functioning in parallel has also resulted in higher speeds and greater efficiency.

The resulting doubling of the drive's durability i.e operating life is passed straight on to the customer in the form of a generous 5 year guarantee. Samsung also reserves part of the 860 EVO as a "TurboWrite" buffer, in addition to the previously available 512 MB LPDDR4 cache.

Of course Samsung also equips the 860 EVO with an extremely fast SATA 6G connection and, thanks to its diminutive proportions, the drive is also capable of fitting in every possible configuration. Additionally Samsung bundles Magician Software in with the SSD, an excellent monitoring and data migration tool.

Note: The use of the TRIM funciton requires the use of a compatible operating system. Only Windows 7 and higher, Mac OS X 10 and higher as well as Linux from Kernel 3.8 and up offer optimal support. 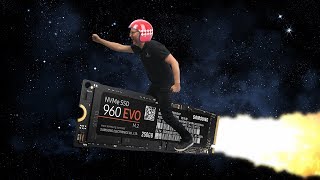