The IceGiant ProSiphon Elite is an innovative CPU cooler. What sets the Elite apart from typical CPU coolers with traditional heat pipes is that its cooling capabilities won't stagnate under high thermal loads. Quite the reverse: the more heat the CPU produces, the better the cooling performance. Similar to a water-cooled solution, the coolant moves in a loop, but without relying on a pump.

As the thermal load of the CPU increases, more boiling occurs, thus transferring more heat away from the chip. This makes it the ideal match for continuous operation of power-hungry, high-end desktop CPUs such as AMD's Ryzen Threadripper with a TDP of 250 W and beyond. IceGiant includes four 120 mm PWM fans to be mounted on the ProSiphon Elite in a push-pull configuration and grants a remarkable 10-year warranty.

The Features of the IceGiant ProSiphon Elite CPU Cooler at a Glance:

The IceGiant ProSiphon Elite is an innovative CPU cooler, with thermosiphon principles. The ProSiphon Elite excels at cooling extraordinarily demanding CPUs, such as AMD's Threadripper platform and Intel's HEDTs. Traditional heat pipes of air-cooled solutions may suffer from dry-out at high TDPs beyond 250 W and water-cooled solutions rely on a pump to drive the loop. While offering great cooling performance, custom water-cooling loops require high maintenance and a sophisticated setup. Traditional heat pipes on air-cooled CPU coolers are hollow chambers lined with a wick and filled with a small amount of liquid. The heat generated by the CPU is transferred to the liquid via the contact plate at the bottom of the cooler, where the liquid will eventually boil and turn to vapour.

Subsequently, this vapour rises inside the chamber. Multiple fins are attached to the outside of each heat pipe, which help to cool the vapour. Cool air is blown through these fins, which causes the gas to condense back to liquid. The liquid is then absorbed by the wick inside the chamber and transferred back to the contact plate. A problem arises when the heat generated by the CPU reaches a threshold and causes so much of the liquid to boil inside the hollow part of the heat pipe that the vapour must intrude into the wick. The direction of this vapour travelling through the wick is in opposition to the returning liquid.

Thus, liquid is blocked from returning and completing the cooling loop. Without circulation, there is no cool liquid to absorb the heat from the CPU, resulting in thermal throttling.

This so-called dry-out is typically observed with power-hungry high-end desktop CPUs such as AMD's Ryzen Threadripper with a TDP of 250 W and higher. IceGiant's ProSiphon Elite circumvents these problems using a large evaporator chamber with a higher amount of cooling fluid that is gravity-driven. At high wattages, this technology surpasses traditional CPU coolers using heat pipes and even rivals the performance of a custom water-cooled solution without relying on a pump to drive the loop.

In the ProSiphon Elite, the evaporator contacts the CPU and transfers the heat to the coolant, which then boils. Due to the lower density of vapour, the vapour rises inside the loop, again passing fins attached to the outside of the Elite. Fans push cool air through the fins, causing the gas to condense into liquid again. Due to the gravity potential between the condenser and evaporator, the liquid naturally falls back down to the evaporator.
The ProSiphon Elite has two main advantages: First, it was specifically designed to surpass the dry-out limit of traditional heat pipes on high-wattage CPUs. The ProSiphon Elite excels at continuous operation and workloads requiring multiple overlocked cores.
Second, since there is no pump involved, the reliability is vastly improved over a water-cooled solution. With no moving parts, except for the fans, possible points of failure are eliminated. Thus, IceGiant confidently grants a 10-year warranty for the ProSiphon Elite. The ProSiphon Elite comes with four 120 mm PWM fans, allowing for an efficient push-pull configuration to optimise airflow. Running between 300 and 2,300 rpm, each fan pushes up to 122.15 m³/h of air with a static pressure of 3.3 mmH2O.

This results in a maximum noise of 32.2 dB(A), which can be toned down by reducing the fan speed via PWM-control. Two of the fans are already pre-installed, and the other two are detached to allow for easier installation onto the CPU bracket. Featuring a remarkably large contact plate, the ProSiphon Elite fits most CPU sockets. Furthermore, the scope of delivery includes an AMD and Intel bracket, a sturdy backplate for sockets 1366, 115x, and 1200 as well as various screws and stand-offs.

A handy screwdriver and splitter cable complete the package. The high-quality Kryonaut thermal paste from Thermal Grizzly with an excellent heat conductivity of 12.5 W/mK unlocks the full potential of this innovative cooling system.
Caution! The IceGiant ProSiphon Elite is made of aluminium and must not be used with liquid metal. IceGiant recommends using top-exhaust fans to direct the heated air out of the case when using a motherboard in vertical orientation. For the gravity-driven loop to function properly, make sure to install the cooler as shown in the manual. Improper installation can result in insufficient cooling and possible damage.

Note: The IceGiant ProSiphon Elite allows for a maximum of 48 mm RAM height and needs a minimum of 164 mm clearance towards the side panel. 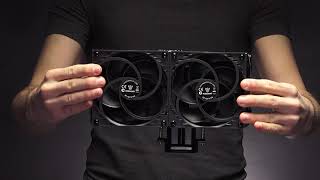