AMD's Zen architecture was a milestone in the history of CPU architecture and a stroke of genius by the Texas based chipmaker. Instead of resting on its laurels, AMD has been busy improving the "Zen" processors. The result is the new "Ryzen 3000" processor family based on the "Zen2" architecture with its chiplet design. The Ryzen 9 3900X for example consists of a 12-nm I/O die and two CPU dies manufactured in a 7-nm process.

This is where professional overclocker Roman Hartung comes into play. Using his der8auer RYZEN 3000 OC Bracket AIO Mount the base plate of an AIO can be flexibly positioned on the heatspreader.

The Features of the der8auer RYZEN 3000 OC Bracket AIO Mount at a glance: The RYZEN 3000 OC Bracket AIO Mount replaces the AM4 mounting bracket on the motherboard. Accordingly, the RYZEN 3000 OC Bracket AIO Mount is only compatible with AiOs using the "AMD Socket AM4 Retention Mounting Bracket"! In addition, the compatibility of the AM4 motherboard must be taken into account, as some mainboards components such as transistors may prevent installation.

The following motherboards were tested by Roman:
In addition, other motherboards are compatible with the RYZEN 3000 OC Bracket AIO Mount, which needs to be modified by the user himself. These modifications are only recommended for users with the appropriate know how and experience. More information about the necessary steps can be found in the video linked below.

So far only X570 motherboards have been tested for compatibility. However, the der8auer RYZEN 3000 OC Bracket AIO Mount will also be compatible with a variety of older AM4 motherboards in the ATX and E-ATX form factor. Mini-ITX motherboards often have components in the way, which prevent attaching the kit.
Notes:

Only use AiOs which have a Socket AM4 Retention Mounting Bracket!

Please refer to the list with compatible motherboards and the corresponding notes! It may be necessary to adapt the Bracket AIO Mount (see compatibility lists!).

The actual temperature reduction that can be achieved by using the Ryzen 3000 OC Mounting Frame depends on the CPU and CPU cooler used. 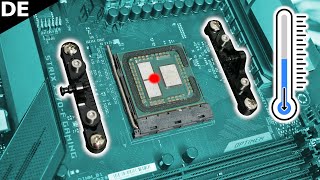 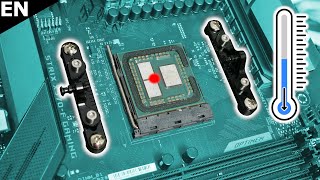 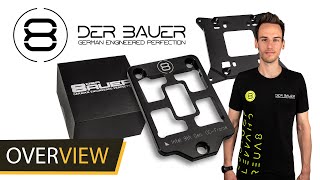 Fitted to a msi b450 tomahawk max without any problems, I have 3900 overclocked to 4Ghz all cores and temps have lowered a average of 5 degrees C, very happy with the product

Fitted to a msi b450 tomahawk max without any problems, I have 3900 overclocked to 4Ghz all cores and temps have lowered a average of 5 degrees C, very happy with the product